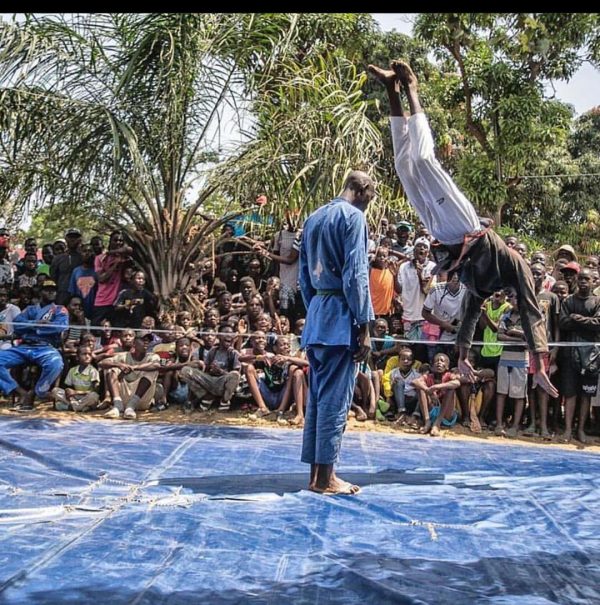 Mario Stefan is a black belt in Angolan jiu-jitsu tradicional, a special form of the Arte Suave that takes its name due to the use of “traditional” standing attacks and the incorporation of weapons. Otherwise, it’s far from what any of us would consider traditional in the normal sense.

Stefan was introduced to traditional jiu-jitsu through Master Luvumbo Fernando, better known as Master Imbo, in 2003, a local from the neighborhood.

“The day I met Imbo, he fought with 3 people. It looked like something from out of this world. He was so strong, technical, and aesthetic. It seemed like he was only fighting one person.”

At the time Master Imbo was a blue belt, but his technique was mesmerizingly flawless. He always stood out as a student himself so he decided to start teaching. Now has over 30 black belts and Stefan is one of them.

Two days a week, Stefan, also a native of Cacauco, returns to the neighborhood to teach at Tample Bison Jiu-Jitsu. He tries to help out as much as he can, bringing in training materials to kids that can’t afford to buy them, and acting as a role model in an area inundated with violence.

“Where I come from, Cacuaco, it is a very needy suburb in Luanda with a high crime rate, so martial arts are a way to keep young people out of it and give them a different perspective”.

On mats pulled over sandy dirt floors and shaded by trees, Mestre Imbo and Stefan teach the kids from the community to defend themselves with grace and fluidity. Small kids in mismatched uniforms fly agilely through the air in perfect unison.

The art form incorporates punches, kicks, takedowns, headbutts, and the use of small weapons like Kali or Katanas. If that wasn’t enough, belt tests often involve fighting everyone at your belt level…all at one time.

“In other words, if you’re going to blue and unfortunately, 8 blue belts show up, you gotta fight with all of them. It’s like Vale Tudo, but without gloves or a mouth guard.”

No gloves, no mouthguard, just a face full of fists, feet, knees, headbutts, and the imminent danger of a takedown.

Elbows, low blows, and even biting is fair game in Tample Bison’s Butchugarri tradition. It’s a brutal rite of passage that has earned Bison critiques from Angola’s other 2 traditional jiu-jitsu federations, but it’s been working for them and that’s all that matters.

All of the kids from the community want to be like Master Imbo. He’s calm, intelligent, and, of course, lethal.

He’s exactly the kind of role model that energetic kids and exhausted mothers need in their lives.

Master Imbo Gets his 4th Degree

On December 19th, 2020, Master Imbo from Bison Tamble Jiu Jitsu received the 4th dan on his blackbelt, an honor that Mario Stefan says he is more than deserving of.

Over the years, Imbo has done a lot for the sport, on the tarps spread over sand and dirt. Master Imbo has formed over 30 black belts, an accomplishment that brought the founder of the Jiu-Jitsu Federation to his academy for this memorable day.