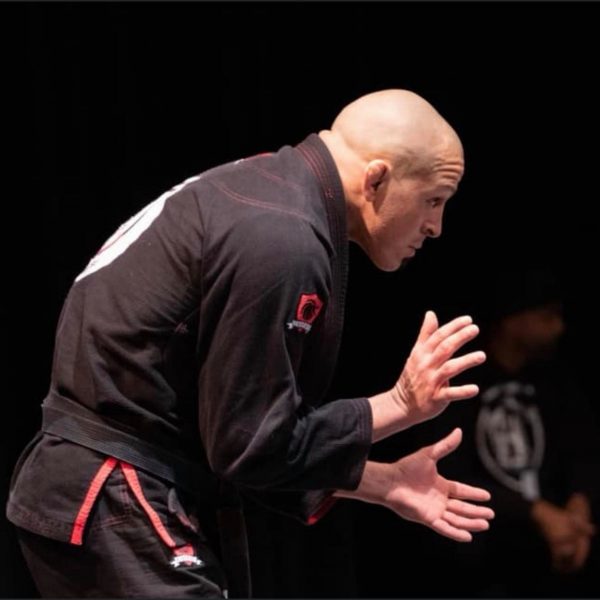 Manny Ray Gonzales is a black belt under Ricardo Guimaraes owner of Ralph Gracie BJJ in Sacramento California. He’s been training since the young age of 14, he started teaching at 16, and, at the age of 17, he abandoned traditional education to teach and train full time.

Now at age of 33, Manny Gonzales has become quite the case study of what racism in jiu-jitsu looks like.

The situation started after losing a 12-year-old competitor, who felt that it was time to move on to a new gym with new challenges. This is a painful part of the natural lifecycle of an athlete and of a coach, and Manny did not adjust well to this change.

He reached out to the student’s father and made a drunken statement with the racist implication that all black people know each other, and, unfortunately for him, he referenced a black social rights activist in said statement, which gained him national attention.

The following is an account of the facts as fair as we can find them.

“If you want it, you know where to find me you dumb fucking n*gger.”

Dom Hoskins, who had no previous connections to the Dom (the student’s father) referenced in the voicemail, was brought into the mix by the outraged and confused students in the Sacramento area. Students reached out to Dom, so Dom reached out to Manny to clear things up, and to encourage him to make a public statement.

Okay kids it’s story time: Manny had a female kid student training under him for a number of years. After she outgrew the gym, her father (Dom) moved her to a different team to give her more challenges.

Should’ve been the end of it, best wishes. Well she’s been ripping it up and is currently undefeated as a 15 year old green belt!

Apparently, Manny wasn’t as cool with the departure as he let on, and earlier this year (February 28th to be exact) he drunkenly called Dom to talk shit to him about him and his daughter.

Obviously, no one’s gonna take kindly to someone trashing their child, so Dom was willing to fight to defend her honor (who wouldn’t be?). It escalated to the point of Manny threatening Dom, calling him excessively, and leaving him a voicemail telling him “if you want it, you know where to find me, you dumb fucking n*gger.”

Somehow in talking about fighting and everyone losing sometime, Manny threw my name in the mix (as he had a victory over me in February), stating he’d beat other Dom’s “buddy Dom.” For those who don’t understand the significance, this is implied racism that all black people are connected and “obviously” must know each other.

I later pulled Manny’s card on this. He backpedaled a ton, not knowing I have all concrete evidence for the things he said.

I’ve since learned these things are not isolated incidents and it’s dangerous to our community. I’ve been getting blown up by people thinking he was coming at me so I posted to clear the air on my end. And you know I keep all my receipts… stay tuned.”

Manny finally made a statement apologizing for “stepping out of his character”, but not to the victims directly (he has asked to keep all conversations private) or to the black community in general. In fact, he didn’t even admit to anything until the black community called him out on it.

Let’s keep it real, that would have been nice to acknowledge that this is more than a drunken slight. This is a man needing to reflect on internalized racism, how he has been actively perpetuating it, and how his “character” may have adversely impacted his students. Clearly, he had been harboring a lot of hatred for this 12-year-old student who had grown into an outstanding competitor.

Instead of owning up to his actions, he made a statement that he is stepping down from the spotlight for a mere month, while his lawyer, family, and friends figure out what to do.

Due to an unfortunate series of events that escalated between myself and another individual, it has come to my attention that I have to address some problems that have caused issues on and off for a while.

I never imagined that it would take a situation like this to address this, but this is not me.

Rather than address things point by point, I’ll say this: I haven’t been myself recently and it really came out front and center the other day. I stepped way out of my character and made a racial slur that I deeply regret and apologize for.

I apologize but I need to address these issues head on privately with my friends and family for at least the next month. The gym will be in good hands while I’m away and I will return better and stronger than ever.

Please don’t look at this as indicative as who I am as a person. If you know me, you know that simply isn’t me. If you don’t know me, know that I can and will do better.

Manny said he felt threatened, but the multiple phone calls, the racist slurs, the racial implications in casual conversation, the gun threats, and the admission that despite 18 years of martial arts training, “he doesn’t fight fair” is more than a “step out of character”, it’s the epitome of racism in Jiu-Jitsu.

While Manny steps down and convenes with his friends and family, we wait for explanations.

What made him feel threatened, when all evidence points to him as the agressor?

What made him feel the need, after two years, to lash out in such a drunk and inappropriate manner?

What other racial slurs or inappropriate remarks about like the one about “Dom Buddy” has he made in the presence of his students?

Why should he be trusted to continue to work with kids in the community?

As we wait for Manny’s responses, I will leave you with the remarks of one of Dom’s students from the Youth Jiu Jitsu Collective nonprofit program.

Dom Hoskins and others are working with a group to effect change in the community. There will upcoming workshops/forums/open mat-type events focused on diversity and inclusion in the jiu-jitsu community.

The first one would be focused on students, their experiences and desires from an instructor and training environment, and discernment on finding the proper gym fit for them, as well as what to look for in terms of toxic environments.

The second one would be focused on academy owners and instructors, and their beliefs on gym culture, discernment when promoting people, and how to promote/build inclusive training environments.

The third would be a combination of both students and instructors, focused on bridging gaps in gym culture to alleviate the toxic messes we’ve seen.