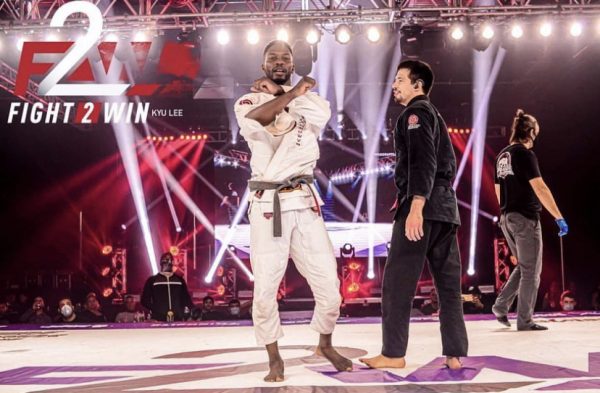 Dom Hoskins, a black belt from Alliance, owns his own academy, works with a local jiu-jitsu nonprofit, and is also an active competitor with over 21 Fight2Win appearances.

He recently spent a couple of weeks holed up in the F2W Airbnb in Philly for an unexpected two-week doubleheader. Why not? With most of this year’s competitions canceled, the Oakland-based black belt is trying to make the most of the competition season, plus Seth Daniels is a pretty chill dude to hang around. This is especially important in a time where racial tensions have been making a lot of our old BJJ friends not so cool people to be around.

Hoskins has been pretty vocal on his stance on Black Lives Matter and the increased cases of police brutality that have been polarizing the BJJ community. A son of civil rights activists and native of Oakland California, his roots trace all the way back to the Crips. I’m not talking about that typical “he was born in a bad neighborhood, gang bang” type shit, I’m talking about “his parents were negotiating peace with the man Stanley “Tookie” Williams himself.” They were present and active voices during the civil rights movement and they raised their son to instill social justice in all aspects of his own life.

Anytime politics touch sports, like in the case of Kaepernick, conservatives are quick to clamor that there is no space in here for social justice, but that’s anything but that case. Sports often serve as the only equitable opportunity for the kind of people that Kaepernick knelt for. The intersectionality of sports and social activism is Hoskins specialty. Not only is he a teacher and a gym owner, but he also works with a nonprofit in Richmond California to bring jiu-jitsu to schools.

The Youth Jiu-Jitsu collective used a holistic approach to wellness in children by combining BJJ, Wresting, Kickboxing, and a 29-week mindfulness program.

Our goal is to give youth more space and time between emotions and reactions. Our mission is to lower referrals, suspensions, and expulsions because this leads directly to incarceration and disproportionately affects youth of color.

People often ask how they can replicate social projects like the ones in Rio’s favelas here in the USA, but the fact of the matter is, it’s kind of hard.

Favelas function in Rio’s informal economy, allowing them to reach their demographic with effective programs without having to appease school boards or fear legal repercussions from litigious parents. Fellow community leaders, like Ryan Jardine from Project Grapple in Liberty City, also spoke of the difficulties involved with functioning in the underfunded and overlooked area of “after school programming.”

They succeeded in bringing BJJ to FOUR public schools in THREE different cities in California’s East Bay. They focus on kids in foster care and those likely to be on and off of probations before receiving official adult sentences that will put them behind bars indefinitely. Sports is their first taste of politics, compromise, and sacrifice. Learn to deal with pain and defeat and the fundamentals of perseverance, competition, and comradery.

“ I am going to teach you, but you are going to lose”

Hoskin’s teaches kids to navigate through adolescence by basing their lives on the principles of martial arts. He uses jiu-jitsu to teach kids to “fail forward” each time they tap or when frustration keeps them from learning the new technique. Mindfulness and meditation, which are almost impossible to teach to middle school kids in a classroom setting, become essential in the last minutes of a fight when failure to mind your breathing could get you choked out.

It just hits differently when you teach it like that.

Imagine if police functioned on the same principles that Hoskins teaches to students through the Youth Jiu-Jitsu Collective. If they were to be held to the same standards as a martial artist who trains in a safe environment where their reactions can be evaluated by trainers and psychologists.  Imagine if police were familiar with the communities they serviced and the services their community members needed to ensure their own mental and physical safety. These are ideas that Hoskin’s often brings up when asked what “defunding police” actually looks like.

For Hoskins, it’s important that people like himself, with a platform to speak from, do exactly that. Whether it’s standing up at a rally, making social media posts, or using your walkout music to rile up racists at F2W, every little step matters.

If you want to hear more of Hoskin’s stances on BJJ and Black Lives Matter check out Episode 77 of the BJJ Goons podcast.