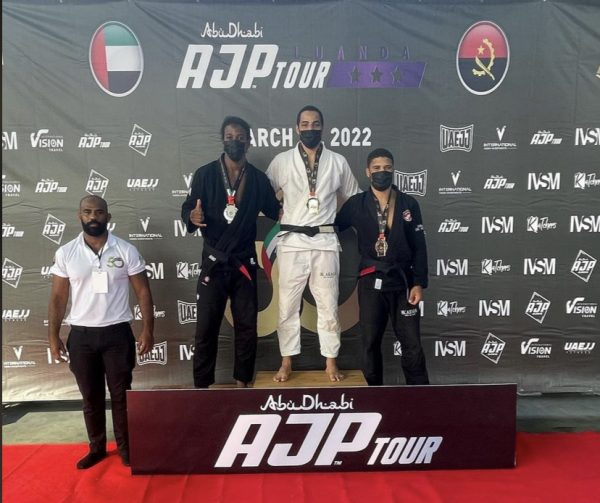 On March 27th, the Abu Dhabi AJP Tour Luanda touched down in Angola with one of Africas’s most anticipated events of the year. However, not everyone who medaled, did so happily. Marinaldo Morais, a black belt from GF Team Angola, had referee issues with 2 of his matches and when he raised his concerns was called disrespectful and told that he lacked posture.

We all know you can rarely overturn a ref’s decisions, but there are ways for AJP tour’s Angolan counterparts to address these issues.

Morais, who took 2nd place in the 77k division, spoke out on social media about his experience with several bad ref’s calls which ultimately lead to his decision to walk off the mats.

“This video was my first fight in this Sunday’s championship, #AJP LUANDA TOUR and here goes my first complaint of the championship in respect to the arbitration team. The judge decided to give an advantage where it never existed, luckily I was winning the fight 2-0 because if the fight had been a draw I would have lost because of this so-called mistake that could have been avoided or corrected but nobody seems to care much.”

Let’s take a look at the AJP Rules

• When one athlete takes their opponent to the outlying safety area while trying to stabilize a scoring position, the referee shall wait, whenever possible, for an athlete to stabilize the position for 3 seconds before stopping the match. If this happens, the referee will give the points and then restart the match in the center of the combat area.

• When the match exits the combat area due to the movement of an athlete attacking a submission hold, the referee will not mark 2 points after stopping the match. Instead, the referee may give an advantage depending on the proximity of the submission, while respecting the rules of advantages

The first issue was a matter of advantages. A successfully defended take down attempt was awarded an advantage. It was odd, but luckily not a factor that determined the match. This wasn’t the last bad decision though, Morais made it through the first round to find himself in the final.

In most cases there would be 3 refs for a black belt final. This however, was not most cases, whether it was due to lack of staff, or just the size of the competitions Morais found himself in the finals with only one ref. Morais hit a sweep from the 50/50 that would have won him the match but the ref turned a blind eye.

So what can and should be done in situations like this?

According to the AJP Jiu Jitsu Pro rules of athlete conduct athletes can receive penalties “when an athlete disagrees with the referee decision or clearly demonstrates unsportsmanlike attitude inside the competition area, such as avoiding shaking the hand of their opponent.”

Morais clearly walked off the mats, but what would you do in a situation where official repeatedly ignore your concerns? Don’t forget, that wasn’t the first time that day this happened!

So, is it unsportsmanlike to politely ask to leave after an egregious decision?

Not all refs are right, and the rules clearly state that the “ruling on the result of each match is incontestable.” They double down on this in red stating “subjective referee interpretations of points, advantages, or penalties are final and not subject to change.”

If we want to hold athletes to high standards of sportsmanship then we need to make sure that referees are held to an even higher standard, especially for an organization as prestigious as the AJP Tour.

The rules are definitely more lenient when it comes to this aspect stating that “whenever possible, may opt to appoint 3 referees to any match or use an additional referee with access to video footage.

Tucked away in the rule amendment there is indeed a clause that states “during the final athletes’ coaches are allowed to request one review of score or movement per match using the Falcon Eye System.”

However, Morais requests to review the footage of the final were not well received from the staff who considered it a lack of respect on his behalf. Fady Saad, the ambassador of the AJP in Angola, asked for us to remove the video from our social media page, but made no other comment in regards to the athletes’ concerns or why he didn’t want the video shown.

We know we cannot change the rules mid competition, but we can address the policies and concerns in situations like this. Maintaining open communication between athletes, academies, and federation is essential for the growth of jiu-jitsu.