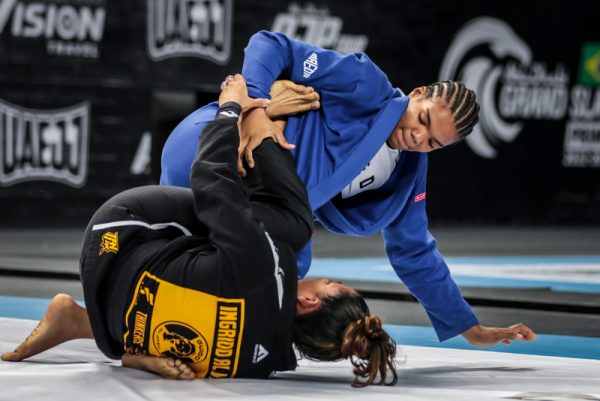 As usual, the brackets were filled with huge names in all weight classes. Returning champions confirmed their conditions as favorites, but also upcoming talents wrote new chapters in the ADGS history. In the end, Jiu Jitsu fans left the Arena Carioca 1 pleased to have witnessed the best of the best in action.

Leonardo Mario, champion in the Professional Black Belt Featherweight, talked about his performance: “I am so happy I won the -62kg division. I want to thank the AJP for this amazing event. I hope to be back!”

Ana Rodrigues, champion of the Light-featherweight division, also talked about the experience of competing in the Abu Dhabi Grand Slam: “I love this event. It’s where I can try new things in my game. I’ll surely be in Miami for the next one.”

Here’s how each weight division played out.

Light-featherweight (-56kg) – Yuri Hendrex secured the gold medal in two matches. He first beat Jonas Vasconcelos 6-1. In the final, Yuri Hendrex went ahead 1-0 for attacking Zayed Alkatheeri’s foot. Also with a toe hold, Zayed tied the match 1-1. Yuri swept and went 4-1 in the lead. Until the end, Yuri Yuri kept attacking to win with a 8-2 lead.

Featherweight (-62kg) – Leonardo Mario had four matches to become an ADGS champion. He beat Nathanael Fernandes 3-2, Ariel Magalhães 3-0 and Ronaldo Alves 3-2 in the semifinal. In the final, Matheus Lima started out scoring one point in the guard pull against Leonardo Mario. On the bottom, Mario defended Lima’s guard passes and eventually attacked the triangle and finished with an armar for the gold medal.

Lightweight (-69kg) – Meyran left no opponent standing. He finished all his rivals except one. Argentina’s Ivan Strick, Kwait’s Nasser Farj, Artur Oliveira and Fernando Favari had no option but to tap. In the final, Meyran Alves started on bottom and swept Alessandro Botellho with three minutes left on the clock to score two points.Alessandro came back and almost got a sweep, but scored one point. The match ended with a 2-1 lead for Meyran, who secured the gold medal.

Middleweight (-85kg) – Five matches for Jansen Ramos on the way to the top of the podium. He beat Lucas Nascimento 3-0, Lafayette Pinheiro 6-1, Uanderson Ferreira by disqualification and finished Leon Brito in the semifinal. In the final, Rafael Paganini started playing guard against Jansen Ramos. The match had not a lot of movement in the first three minutes. In the final two minutes, Jansen went on a blitz and almost passed Rafael’s guard several times to build a 5-0 lead and secure the gold medal.

Light-Heavyweight (-94kg) – Four tough matches for Rider Amaral to take the gold medal home. He beat Igor Sousa 1-0, Hygor Silva 2-0 and Fernando Cantareira 3-0 in the semifinal. In the final, Gabriel Oliveira started playing guard against Rider Amaral. It was Rider that scored the first point with a near guard pass. Rider scored another point and secured the gold medal with a 2-0 lead.

Super-Heavyweight (-120kg) – A gold medal in four matches. Yatan Bueno finished Victor Martins and David Remedio. In the semifinal, a tough match against Pedro Pimenta and a win by referee decision after a 0-0 tie. In the final, Yatan Bueno managed a beautiful takedown and went 2-0 on the board against Marcus Siqueira. On top, Yatan scored three more points for near mounts. As the clock ran out, Yatan secured the gold medal with a 5-0 lead.

Roosterweight (-49kg) – Three matches for the title in Brenda Larissa’s campaign. She finished Flávia Soares and outscored Diana Teixeira 3-0. In the final, Brenda Larissa started on top against Jessica Dantas. With two minutes left on the clock, Brenda managed a guard pass to score three points. Brenda stayed on top and let the clock run out to win 3-1 and secure the gold medal.

Light-featherweight (-55kg) – Ana Rodrigues fought four times. She beat Milene Silva 6-0, Randryely Souza 1-0 and Maria Nunes 4-0 in the semifinal. In the final, Ana Rodrigues started playing guard against Dyna Sena. Within the final minute, Ana managed a sweep to score two points. Dyna could not come back and Ana secured the gold medal.

Lightweight (-62kg) – Julia Alves made it to the top in three matches. She finished Nayane Dumont and Maria Silva in the semifinal. In the final, Julia Alves started on top, took the back and finished Maria Luisa Delahaye with a bow and arrow choke in less than two minutes to become the champion.

Middleweight (70kg) – Four battles for Izadora Silva on her way to the gold medal. She beat Sabatha Santos for scoring last in a 2-2 tie, finished Gabriela Teixeira and beat Thalyta Silva by referee decision in the semifinals. In the final, Rafaela Brtolot started playing guard against Izadora Silva. Rafaela managed a sweep to score one point. Izadora never gave up and managed two near submissions to score two points and win 2-1 for the gold medal.

Heavyweight (-95kg) – Gabrieli Pessanha entered the mats three times. She finished Mayara Moreira and beat Welma Moreira 3-0 in the semifinals. In the final, Gabrieli Pessanha started on top against Ingridd Sousa. The two played guard, trying to get the best position. Pessanha went ahead 2-0 on the board with a sweep. Gabi stayed on top until the end to secure another gold medal in the ADGS Rio.

Click here for the complete results of day 3 at the ADGS Rio. You can rewatch all matches on ajptour.tv. Follow the complete coverage on our Instagram.